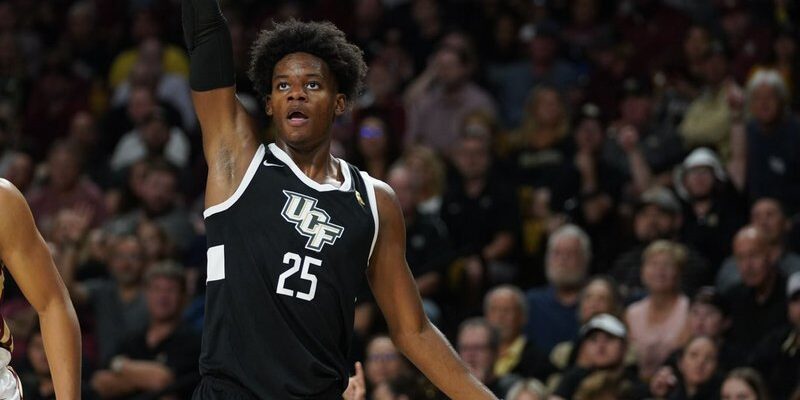 After opening the season with a win versus Illinois State and a blowout victory against Division III Rockford University, the Leathernecks took their first loss on November 11 in Chicago at the hands of DePaul.

Much like the Knights, WIU features a bevy of new faces. Last season’s team saw five players score in double figures, but only one returns this year. Fortunately for them, it’s 6’2” Senior guard Trenton Massner, who led the Leathernecks in scoring (16.4), rebounding (6.2) and assists (4.0) last season. Through this year’s first three games, he continues to stuff the stat sheets, again leading WIU in rebounding (6.7) and assists (7.0), along with being the second-leading scorer (13.0). High-scoring honors thus far belong to Winona State transfer Alec Rosner (17.7), a 6’3” Senior guard.

Redshirt Junior guard Quinlan Bennett returns from two ankle surgeries that sidelined him for the entire 2021-22 season. He’s not only scoring at an 11.3 points-per-game clip thus far, but has also been given the defensive responsibility of guarding the opponent’s best wing player.

“I like our athleticism. I like our versatility. We’re not as big as last year’s team but I think we have a lot more depth and we’re faster,” Jeter says of his new-look 2022 squad. “For this team, it’s going to be about finding ways to score the ball, then letting our defense carry us through.”

Might this be one of those “trap” games? There’s always that lingering possibility, as the Knights are undoubtedly feeling good about themselves after dominating Florida State in their last game on November 11. In his FSU postgame presser, UCF Coach Johnny Dawkins said a big focus for the WIU game will be limiting turnovers, which he cited as a major reason the Seminoles tallied 28 fast-break points. “We have to do a better job of taking care of the basketball,” Dawkins said. “I think that will prevent some of those live ball turnovers and easy run-outs that allow high-percentage opportunities to score. We have to try to eliminate those.”

You may be wondering how the Leathernecks got their nickname. In 1927, United States Marine Ray “Rock” Hanson was the school’s Athletic Director and coach of the basketball, baseball and football teams. (At this time, the school was known as “Western Illinois State Teachers College”; it was renamed Western Illinois University in 1967.) Due to his status as a noted World War I hero, they received special permission to use the Marine Corps’ “Fighting Leathernecks” nickname, official seal and bulldog mascot. In 2009, the team began using “Leathernecks” as their lone nickname.

To this day, WIU is the only non-military institution to have its nickname derived from a branch of the military service.