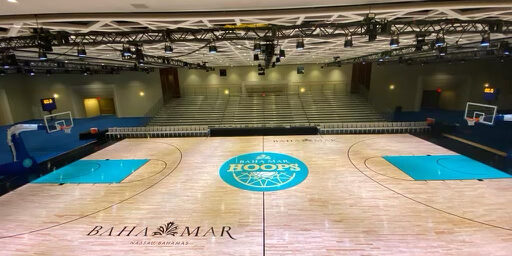 The Knights head to the Bahamas to take on Oklahoma State, in what will give them a preview of a 2023 Big XII conference foe. After opening their season with a win against UT Arlington, the Cowboys surprisingly dropped a 61-60 decision to Southern Illinois. In that contest, OSU squandered a double-digit second-half lead against the Salukis, scoring just one field goal in the final five minutes, and missing three of four free throws down the stretch. Oklahoma State was able to right the ship in their last game on November 13, traveling to Rochester, Michigan and routing the University of Oakland 91-62.

Two seasons ago, the Cowboys were riding high, finishing 21-9 and advancing to the second round of the NCAA Tournament led by the top pick in the entire 2021 NBA Draft, Cade Cunningham. Last year, however, they slipped to 15-15 after being declared ineligible for postseason play due to the actions of former assistant coach Lamont Evans, who pleaded guilty to Bribery Conspiracy charges brought against him by the FBI.

The team’s top two scores return, and Coach Mike Boynton has restocked the roster with some impressive transfers in the last two years. Back is 6’3” Senior guard Avery Anderson III, who leads the team in points (13.0) and assists (3.7) per game. Also returning is 6’6” Junior Bryce Thompson, who played his Freshman season at Kansas, then averaged 10.6 points per game in his first rodeo as a Cowboy. Last season’s leading rebounder Moussa Cisse, a 7’1” Junior and native of Guinea, did the dirty work around the basket in his first season at OSU after playing his Freshman campaign at Memphis. He’s averaging 10 rebounds and protecting the rim well this season, blocking 3.3 shots per outing.

It’s mini-tournament time! Along with DePaul and Santa Clara, UCF and Oklahoma State will participate in the first of three Baha Mar men’s and women’s tournaments in Nassau (none of the others involve UCF). DePaul and Santa Clara will play immediately following the UCF game, and winners of both games will square off on Sunday for the “Bahamas Championship.” Should the Knights drop their opener versus OSU, they’ll take on the DePaul-Santa Clara loser, also on Sunday, in the Consolation game.

While UCF will certainly enter the OSU game as the underdog, I am not ready to count them out just yet. They’ll need to reduce turnovers and use their frontcourt depth to their advantage if they want to advance to the championship round against a Cowboys squad hungry to prove themselves after last year’s slippage.

UCF Coach Johnny Dawkins is eager to see how his team will perform in the neutral-site games this weekend, as it will be his Knights’ first contests away from home in the new season. “When you go on the road, you have to keep your composure and concentrate in an arena that’s not yours,” he said after the Knights’ last outing on November 14, a 70-37 thrashing of Western Illinois that saw 12 different UCF players land in the scoring column. “If we play with that kind of mentality and go out there with confidence, we’ll have a chance to compete on the road.”

For those wishing to watch this weekend’s action, take note that the Baha Mar games on Friday and Sunday will be broadcast on the CBS Sports Network rather than on the usual ESPN family of networks.

John Weis is a freelance Writing/PR professional. His company, Weis Words, serves national clients such as advertising agencies, public relations firms, and sports organizations, as well as small businesses and private individuals. A native Central Floridian and basketball enthusiast, he spent six seasons as Broadcast Coordinator for the Orlando Magic Radio Network early in his career. He graduated from UCF in 1994 with a degree in Communications and can’t wait for the Knights to move to the Big XII.