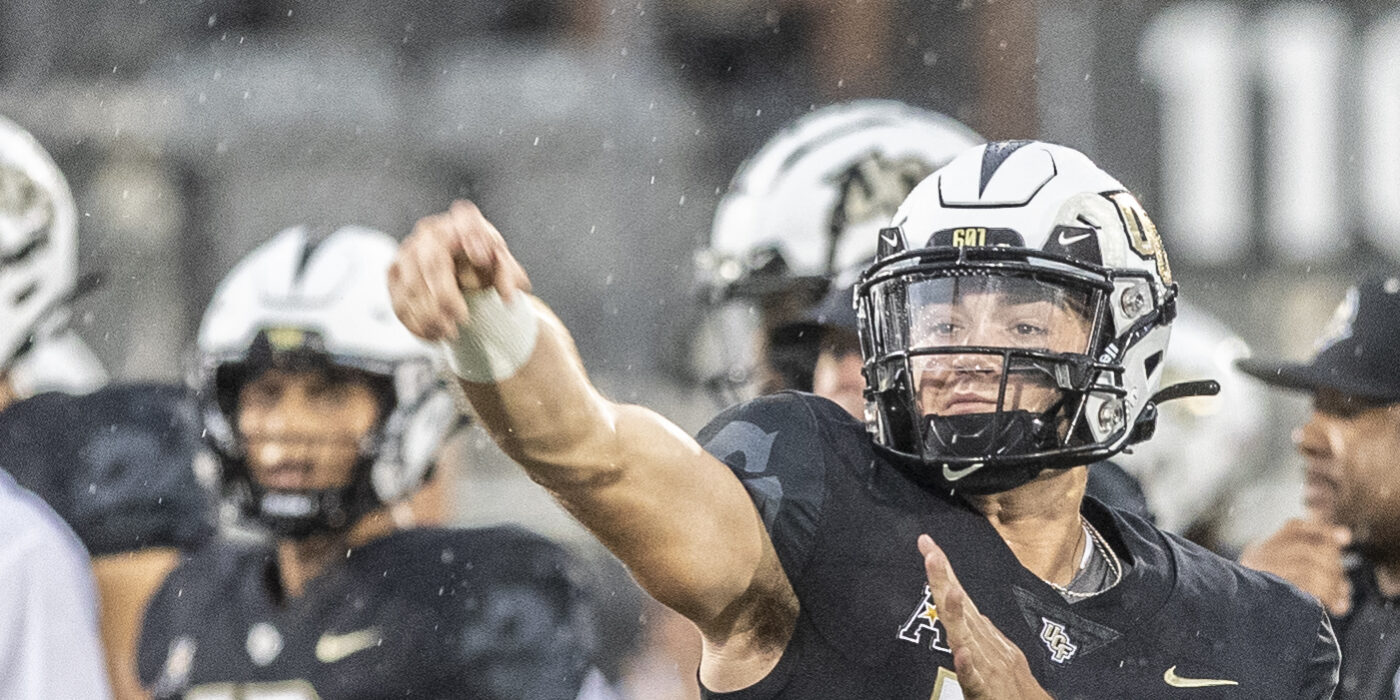 As John Rhys Plumlee ignited UCF’s offense with five total touchdowns, he silenced questions about him being named the starting quarterback for the time being.

Now, the ultimate test of if he can stay the starting quarterback will take centerstage when he faces the Louisville Cardinals on Friday night at FBC Mortgage Stadium.

“Looking ahead to the next one, it’s a big one,” Plumlee said in the post-game press conference on Thursday. “Obviously some of the games last year, there were some big ones for the guys and this next one is definitely one of them.”

Plumlee completed 20 of his 31 passes for 308 yards and four touchdowns in UCF’s 56-10 win over South Carolina State, but his ability to use his legs was a difference-maker for UCF’s offense. He rushed for 86 yards and one touchdown on 15 carries. Plumlee’s legs allowed him to extend plays and keep drives going for the Knights on multiple occasions.

“It’s been a long time coming, waiting on the opportunity that I had tonight,” Plumlee said. “Really blessed is the emotion that I’m feeling right now.”

Now, Plumlee can further cement that head coach Gus Malzahn made the right choice if he turns in a similar performance against Louisville.

On Sept. 17, 2021, the Louisville Cardinals and UCF went back and forth and found themselves tied 35-35 with under a minute to play. A tipped pass from Dillon Gabriel found its way into the hands of Jaylin Alderman for a 66-yard pick-six with 13 seconds left. Louisville went on to win at home 42-35 and hand UCF its first loss of the season.

“Everyone knows how tough of a loss that was for us,” Malzahn said. “This is a game that’s very important to us.”

If the Knights hope to avenge their loss to Louisville, they’ll have to contain quarterback Malik Cunningham. He combined for 364 total yards and three touchdowns against UCF.

“It’ll be a test for our whole defense,” Malzahn said. “He’s one of the best quarterbacks in college football. Things didn’t go as well as they’d like last week but he’s a phenomenal player. We saw first-hand last year.”

Defensive coordinator Travis Williams noted how tough it is to prepare for Cunningham because of how dynamic he is.

“If we could sneak 12 out there, that can help us,” Williams said. “The guy’s dynamic, he’s a Heisman trophy candidate. He’s going to get his and he’s dynamic with his feet, dynamic with his arm — he’s a really good football player. We got our hands full.”

Against Syracuse, Cunningham completed 16 of his 25 passes for 152 yards and two interceptions in Louisville’s 31-7 loss to Syracuse. He also rushed for 49 yards on 13 carries.

Despite the 31-7 loss to Syracuse on Saturday, Louisville figure to be a much stiffer test compared to SC State.

“I know Louisville didn’t play their best this last game,” Malzahn said. “We know we’ll get their best.”

Louisville head coach Scott Satterfield had high praise for Plumlee and the impact his speed has on the game.

“This is maybe the fastest QB we’ve ever played against,” Satterfield said. “He can fly. He runs like a skilled wide receiver that’s playing quarterback. We’ve got to be able to fit right and be where we’re supposed to be and you better wrap up.”

Satterfield also noted the physicality that Isaiah Bowser brings for UCF. That’s something he mentioned his team will have trouble simulating due to the quick turnaround.

While there are many variables that’ll go into deciding UCF vs. Louisville, it may end up being as simple as which quarterback plays better. The odds that Cunningham has back-to-back bad games are slim.

UCF will need to rely heavily on Plumlee, who’s just in his second game under center since 2019. But if Plumlee can continue to take advantage of his second chance as a quarterback, the sky may be the limit for UCF.

“As a kid, it’s been my dream to play football and baseball at the highest level,” Plumlee said. “I’m getting to live out 7-year-old John Rhys’ dream. I’m extremely blessed.”