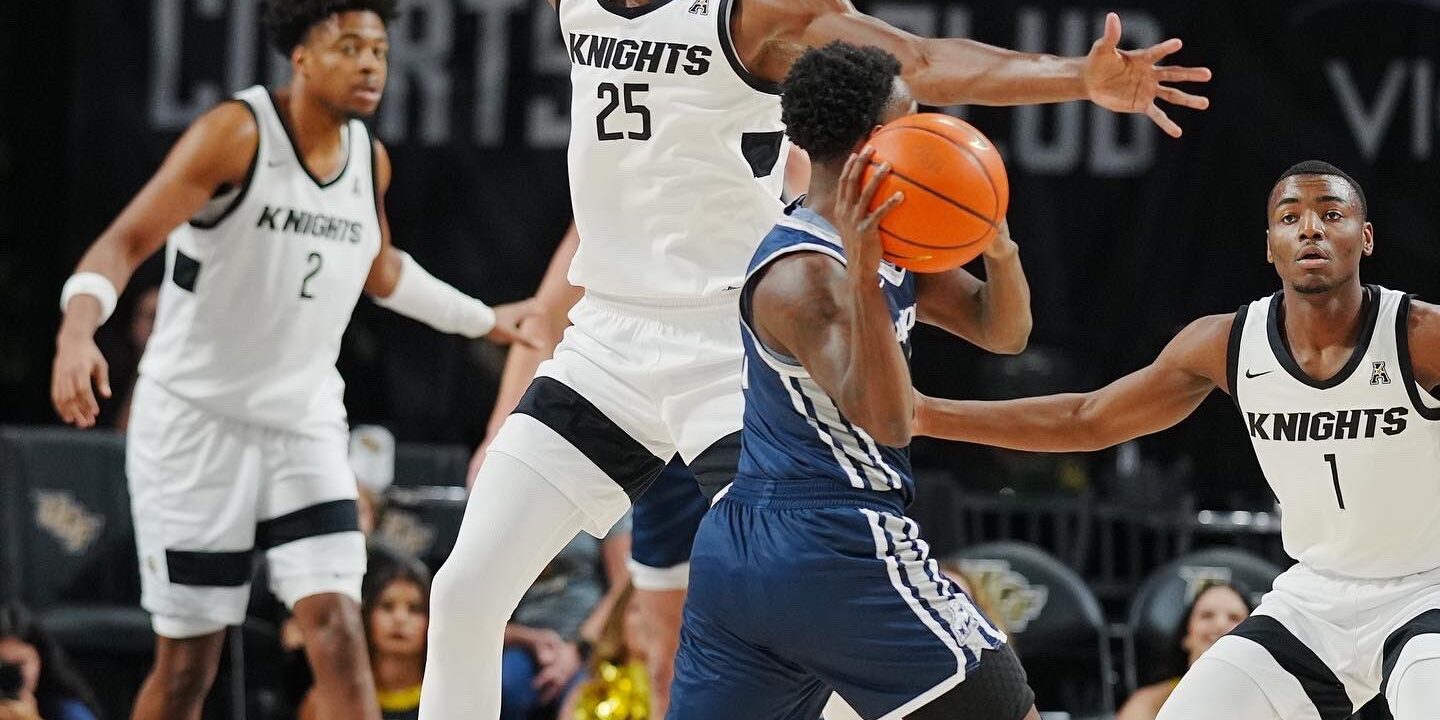 Forty minutes wasn’t enough for the UCF Men’s Basketball team as it again needed overtime to pick up a win, this time 80-77 over the Samford Bulldogs.

From start to finish, the game was tight as both teams’ biggest lead was a mere six points. The Knights attempted to pull away in the game multiple times but credit to Samford for stopping the Knights’ offensive runs. At halftime it was only a 2-point game with the Knights leading 33-31; Taylor Hendricks was perfect from the floor with a pair of 3s.

In the closing minutes of regulation, Hendricks, Darius Johnson, and C.J. Kelley all hit clutch shots on the perimeter. Knotted at 70 a piece in overtime, the Knights showed their trademark defense to close out the game with Jhaylon Young and Brandon Suggs making big-time free throws to give the Knights a 3-point win. UCF improves to 6-2.

UCF has already played in three overtime games this year, winning two. This team has shown repeatedly that no matter the opponent they will not shy away from the pressure. As Head Coach Johnny Dawkins has said this team is still building chemistry. An interesting quote from Taylor Hendricks in the post-game news conference caught my attention: “Being in these close games helps us. Coach Dawkins isn’t scheduling teams that he knows we can beat by a lot; he’s trying to challenge us.”

The Knights moved the ball well and better than in most games this season. With 14 assists as a team, three Knights notched double figures with Hendricks recording 21 points, CJ Kelly with 16 points, and Darius Johnson with 12 points. Coach Dawkins on practicing ball distribution in practice: “Definitely working on protecting the basketball and working on connecting plays, which means plays that lead to assists. We have some good one-on-one players, but our style of play isn’t built for that, we want to play for each other and off each other.” The Knights must keep working on this as the team currently sits in the bottom half of the NCAA in assists.

Translating Defense into Offense on the Fast-Break

The Knights are sitting inside the NCAA’s top 50 in multiple defensive categories. Even so, the Knights have been struggling to cash in on turnovers, particularly in fast-break situations. Sunday, the Knights only scored seven points off of 15 plus fast-break opportunities. Quick defensive rebounds and steals put the Knights in a great position to strike on the fast break. It will be interesting to see if they’re able to start better capitalizing.

CJ Walker sat out Sunday as he rehabs the injury he sustained vs Miami. “He will be fine as we move forward in the season I don’t see him missing much time, it’s just a matter of rehabbing,” Coach Dawkins said.

For the second consecutive season, UCF is off to a 6-2 start. With this being a new team and identity, it’s still too early to get a sense of whether the Knights are on track to get more than 20 wins, a mark which might put the team in a position to get a post-season bid. With Conference play just a few weeks away, it will be interesting to see how the Knights grow, especially with back-to-back SEC opponents on the schedule.

UP NEXT: The Black and Gold face the Tarleton State Texans at home on Sunday, December 11 at Noon. You can also catch the Knights go for their 7th win of the season on ESPN+.