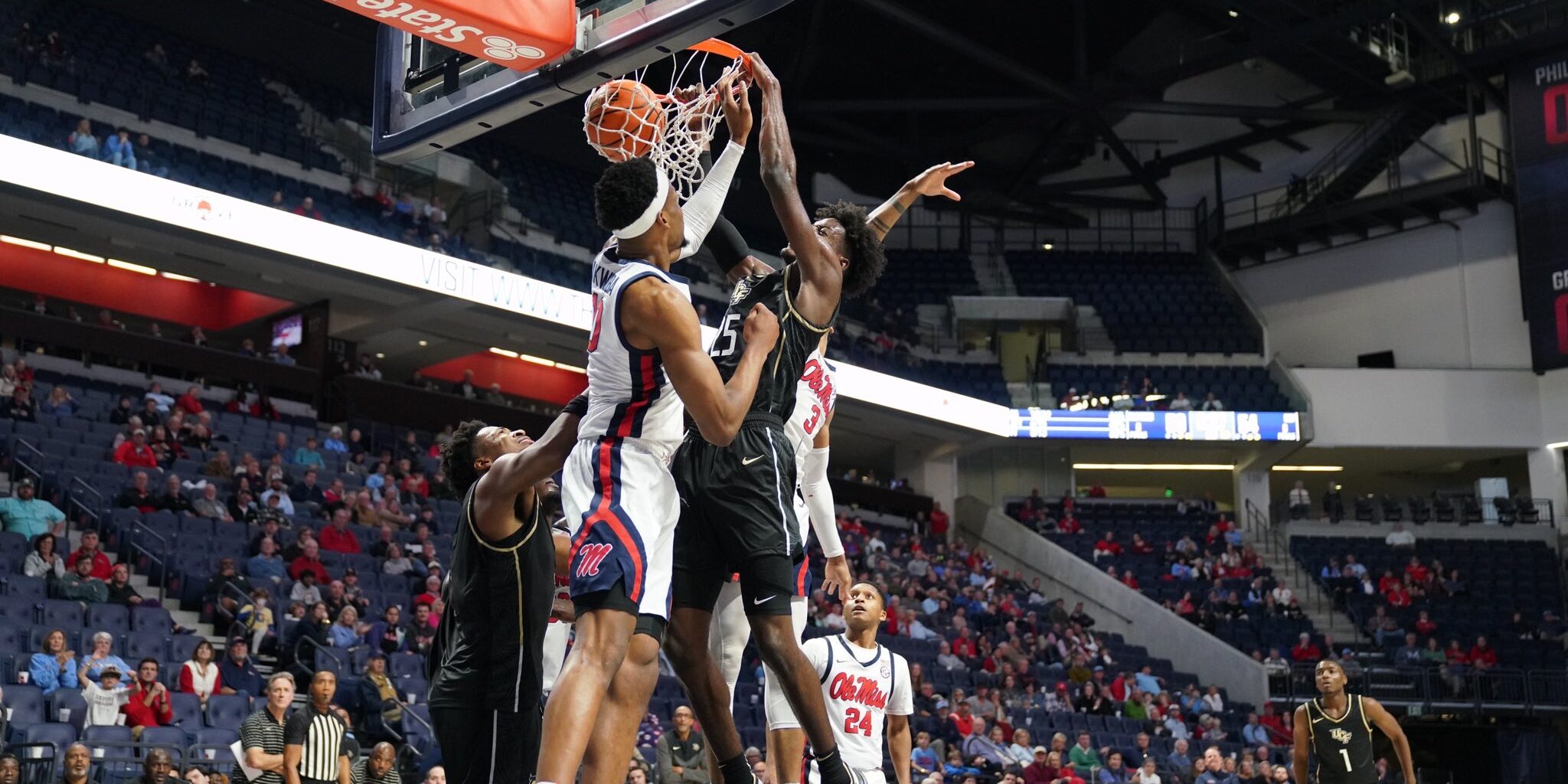 Wednesday night the Knights got out to one of the hottest starts to a game in UCF history outscoring SEC opponent Ole Miss 21-0 and the Knights never looked back in a 72-61 win.

The Knights came to play both on offense and defense by creating turnovers early and often, forcing 10 in the first half. Those forced turnovers were certainly not wasted on the offensive end as the Knights scored 19 points off turnovers. After an Ole Miss 6-0 run to close out the first half, UCF saw themselves with an uncomfortable 10-point lead considering their fast start.

In the second half, Ole Miss did not let off the gas capitalizing on UCF’s offensive drought and minimizing the Knights’ lead to as little as four points at the 10-minute mark of the second half. Entering crunch time, the Knights showed a side of them we haven’t seen much this season by simply holding the lead and not faltering and going on a 22-11 run to close out the game.

Historic start to the game

In UCF Men’s Basketball history, the Knights had never gotten out to such a hot start on the road versus a Power 5 opponent. Ole Miss was no slouch coming into this contest as they were also 7-2. Not only was it the big 21-0 lead they took at the beginning of the game, but the scoreless drought they held Ole Miss to for a lengthy eight minutes. If the Knights can replicate just fifty percent of this historic start moving forward this season, there is a great chance they win in each one their contests, especially taking into consideration the Knights’ highly-ranked defense.

Holding a lead vs. a threatening comeback

Not being deterred by Ole Miss’s resurgence in the second half tested UCF with something we have not seen all season. Being up by as much as 21 points and feeling the pressure of the rival creeping back into the game can be a bit nerve racking.

However, seeing the Knight’s offensive resilience when the pressure was on unlocked another attribute this team has, poise. The Knights crunch time offense really rose eyebrows as players like CJ Kelly, Ithiel Horton, and Taylor Hendricks hit big shots to close out the game. Only collective efforts will propel UCF to victory when their offense needs it most instead of relying on just one offensive player to close out games.

Basketball players than can play offense and defense at a high level are just hard to come by, but CJ Kelly vs Ole Miss demonstrated that he has the ultimate two-way player skill set. Kelly scored 20 points shooting 8 of 10 from the field and 3 of 4 from beyond the arc. Of those 20 points, 16 came in the second half when they mattered most, hitting clutch shots sustaining UCF’s lead. Kelly was also getting busy on the glass grabbing nine rebounds, dishing out three assists and snatching three steals. Leading the team in all those categories, I think it’s safe to say CJ Kelly is a solidified two-way player for the Knights.

All in all, UCF’s performance vs Ole Miss is a complete and balanced effort. A signature defensive performance by UCF was never in doubt. The Knights were also able to get the offensive game going EARLY, something they have been notoriously slow at this season. A collective team effort offensively when scoreless droughts hit was something that helped the Knights pull away for a true road win.

Next up: The Knights will meet the Missouri Tigers in Sunrise, Florida for the Orange Bowl basketball classic on Saturday, December 17, at Noon EST. The game will be televised statewide on Bally Sports Florida.