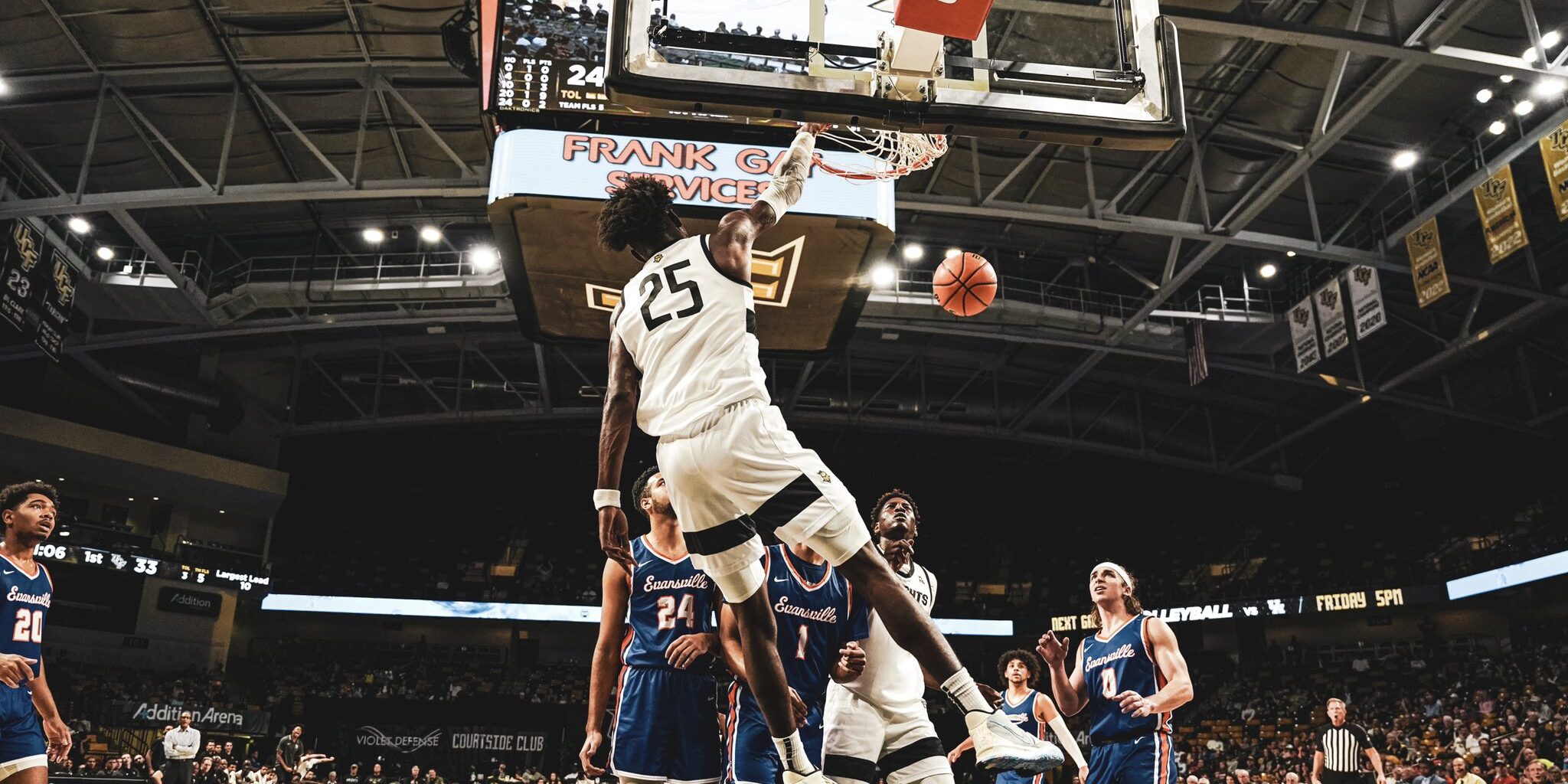 Before Wednesday’s game vs Evansville, UCF Men’s Basketball Head Coach Johnny Dawkins made a change to the starting lineup, with CJ Kelly starting in place of Brandon Suggs. In addition, Lahat Thioune started in place of the injured Michael Durr.

A sluggish start for the Knights had them on the ropes early on. The Aces took an early six-point lead in the first half, capitalizing on sloppy turnovers by the Knights. After that volatile start to the game, the Knights recovered enough to take a five-point lead into the locker room and followed that up by outscoring Evansville 41-26 in the second half. The final score was ultimately 76-56, as the Knights came out on top in big part to contributions from Ithiel Horton and Taylor Hendricks, with both leading the team in scoring with 16 points each.

The win over Evansville came as a result of the Knights re-establishing themselves after what Coach Dawkins described as a “winning hangover” following Sunday night’s victory over Santa Clara that earned UCF the Baha Mar Hoops Bahamas Championship.

Before the Knights host Miami on Sunday at 5 PM, here are my three takeaways from the victory vs Evansville.

Turnovers were a huge problem for the Knights vs Evansville on Wednesday night. UCF turned the ball over 19 times, almost matching their season high in turnovers of 21 when the Knights faced Oklahoma State in a tightly-contested overtime game. We all know perfect basketball is impossible; however, for the Knights to continue their winning streak, they must reduce costly turnovers. Ithiel Horton was asked by the media if turnovers were something they worked on at practice. Horton responded adamantly, “Turnovers are definitely something we’re working on. The more we have the ball, the more opportunities and chances we have to score.”

The Knights have been absolutely lights out this season on defense. They currently sit Top 50 in the NCAA in the following categories: field goal percentage defense, scoring defense, 3-point field goal defense, and turnovers forced per game. Evansville was nothing short of another defensive master class with the Knights holding Evansville to under 35% from the field and 28% from three. Going back to my first takeaway, while the Knights do turn the ball over often, they are compensating on the defensive side of the ball. This illustrates the potential of the team moving forward.

Everything we learned from this Evansville match-up has ultimately led back to being better on offense. The team struggled to gain an early lead against Evansville due to these offensive struggles. Out of 358 Division 1 NCAA teams, UCF is close to breaching the 300-ranking mark in several important offensive categories. The Knights are ranked 288th in Field Goal Percentage, 292nd in turnovers per game, and 239th in overall scoring offense. This is a sign of concern but something the team is improving upon as the season goes on. Trends from previous years show once Conference play starts, the offensive rankings start balancing themselves out. The Knights’ offense certainly isn’t a cause for grave concern so early in the season, but it is something to watch as they face better opponents.

Coach Dawkins addressed the media after the game about his lineup changes with Brandon Suggs and Michael Durr, saying it wasn’t anything more than load management for Suggs. As for Durr, he’s just dealing with some soreness from the previous weekend. Coach Dawkins said they will both be good moving forward.

Darius Johnson played in his first game after sustaining a leg injury in the off-season. Coach Dawkins said he hoped to have Johnson back before conference play began and the good news for the Knights is Johnson returned well before that time. Dawkins is glad to have Johnson back in the rotation and said, “It’s good to have another guard like Darius to give us more depth in that position.” Expect Johnson’s minutes to increase as his role becomes more vital to the team.

Leonardo Rodriguez is a current UCF student majoring in Spanish and minoring in Journalism that is expected to graduate in 2023. Leo is serving as a sports beat writer for the Sons of UCF and works with the UCF Spanish broadcast team for the football games. A sports aficionado, Leo grew up having a wide range of knowledge in Basketball, Football, Baseball, and Soccer. Leo is also a military veteran with 4 years of service.