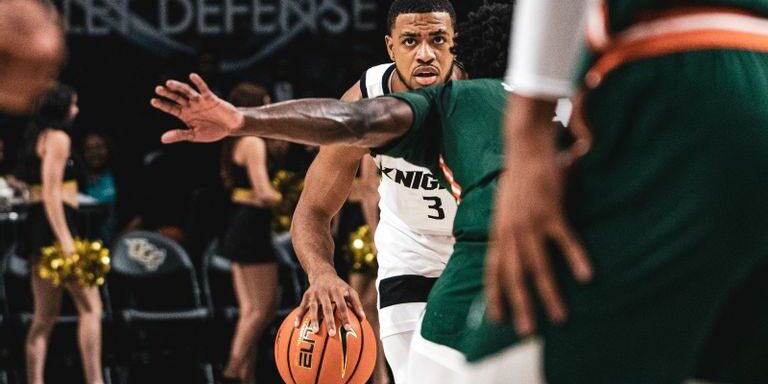 Sunday’s early-season in-state matchup between UCF and Miami came down to the final seconds, with the Knights losing 66-64.

The Knights came out hot on defense by getting stops and scoring easy baskets. Ithiel Horton started the spark with a fast break steal and dunk that forced Miami to take a timeout with UCF on a 7-0 run early on. That quick offensive spurt by the Knights would stall out in the 12th minute of the first half. Even though the offense became stale, the Knights tenacious defense held Miami at the 15-point mark for nearly five minutes.

However, the Knights were unable to get their offense going and created little separation from their rivals. With one minute left in the first half, Miami went on a 6-0 run that included a half-court buzzer beater and the Hurricanes led 32-26 at the break.

In the second half, the Hurricanes extended their lead to as many as 13 points. UCF found themselves in a hole but if there’s one thing we’ve learned about this team this season is their resiliency. The Knights slowly crept back into the contest by creating small 4-0 and 6-2 runs thanks in part to Darius Johnson’s 24 points, a career-high in his second game back from a pre-season lower leg injury.

With just a minute left in the game, the Knights cut the Canes lead to one point. A late foul sent CJ Walker to the free throw line with a chance to tie the game. Walker missed the first shot and intentionally missed the second, which was tipped out of bounds with 1.4 seconds remaining. Following a lengthy review, referees said it went out without enough time for another shot and called the game. The Knights fell to 5-2 on the season.

Offense Fails to Capitalize off of Defensive Master-Class Performance

UCF’s offensive struggles continued against Miami. The Knights were unable to knock down shots or create spaces to find each other open on the offensive end. “In large part, it’s because these guys are still getting to know each other and they’re still trying to connect,” Knights Head Coach Johnny Dawkins said. UCF has struggled with turnovers this season, ranking in the bottom half of the NCAA rankings, and miscommunication between players may be a factor. Coach Dawkins says it’s a work in progress and believes team chemistry will come along as the season goes on.

It is very early in the season, nonetheless, out of the eight games the Knights have played, they have trailed in six of those contests and in three of those by as many as 10 points. Despite losing two of those three games what doesn’t show up on the final score is the team’s resiliency to come back from down double digits and force the game to the wire. “There aren’t any moral victories, but I do think these games help us compete and prepare us for conference play as the season goes on,” Coach Dawkins said.

Darius Johnson is an Absolute BALLER

Darius Johnson was a man on a mission vs Miami. Johnson scored a career-high 24 points with most of those points coming in crunch time. During the post-game presser, Darius talked about how he got on a roll in the second half. “I knew offensively we didn’t have much going on so I had to take matters into my own hands.” Johnson gave the announced crowd of 5,354 plenty to cheer about thanks to some beautiful reverse layups and floaters, along with a pair of 3s. Even though this is Johnson’s 2nd game back this season, you can expect him to keep working himself into the starting lineup and give the Knights the offensive firepower they desperately need.

After missing the last game with some muscle soreness, Michael Durr was back in action off the bench in a limited fashion, scoring two points with one rebound in 11 minutes.

Overall, UCF’s performance vs Miami is still something the team can be proud of. Coach Dawkins praised the match-up calling it “a good game.” Showing fight and seeing what Darius Johnson brings to the table should excite the coaching staff and fans as the season progresses. As Coach Dawkins mentioned in the post-game press conference, “this is a team that still needs chemistry and continuity.” Once the team starts getting that chemistry and continuity, it may find itself on the winning side of contests decided in the final seconds.

Next up: The Knights host the Samford Bulldogs at 4:00 PM Sunday, December 4. You can tune in to this match up on ESPN +