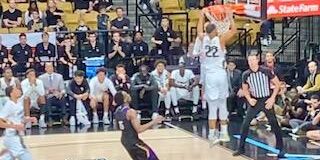 The Seminoles will arrive in Orlando reeling just a bit. Last season ended with a thud, as the team dropped a 96-57 decision to Syracuse in the ACC Tournament and failed to make the NCAA Tournament for the first time since 2016. This season’s lid lifter on Monday night was equally uninspiring, with the ‘Noles suffering a dreadful 83-74 home defeat at the hands of Stetson, an Atlantic Sun Conference squad led by former UCF coach Donnie Jones. It was Stetson’s first victory over the Seminoles since 1975.

Due to injuries and the much-discussed 16-game suspension handed down by the NCAA to prized recruit Baba Miller, the ‘Noles had only eight scholarship players available against Stetson – three Juniors, three Sophomores and two Freshmen.

With Miller currently ineligible, the most heralded newcomer to the FSU roster is none other than Darin Green, Jr. Green, of course, spent three years at UCF before announcing his transfer to Florida State in April. In his last season as a Knight, he put up 13.3 points and 2.6 rebounds per contest, while shooting threes at an impressive 38.8% clip. He’ll look to improve upon his FSU debut that saw him score just eight points on 3-11 shooting in 37 minutes of action on Monday night.

The two debuting freshmen performed admirably against Stetson, as guard Tom House tallied nine points, seven rebounds and an assist; while 6’10” forward Cameron Corhen scored 10 points and pulled down a pair of rebounds.

Now in his 35th season, Leonard Hamilton will need to turn in one of his better coaching jobs this season if the Seminoles are to contend in the always-challenging ACC – and he’s well aware of that fact. “You don’t ever want to say inexperience, but this is the most inexperienced team we’ve had. We showed that tonight,” Hamilton said bluntly in his Stetson postgame presser. “Right now, we have to find a way to accelerate the learning process.” Will they take what they learned against the Hatters and apply it to Friday’s game versus the Knights?

One interesting note: Each Florida State rotation player is 6’4” or taller. Though their length could certainly bother the Knights, it should also allow UCF coach Johnny Dawkins to go deeper in his bench on Friday than they did in their season opener against UNC Asheville. In his postgame presser, Dawkins mentioned having to play his guards big minutes to counteract the small lineups used by the Bulldogs.

Behind 32 points from Brandon Mahan, UCF defeated FSU 86-74 in the last meeting between the two teams, which took place in Tallahassee in December 2020.

Of course, Florida State is not the only team dealing with injuries to key players. UCF will again be without the services of Sophomore point guard Darius Johnson and Senior forward CJ Walker against the ‘Noles, while the status of guard Tyem Freeman is currently not known.